Among all peripheral perimeter 360º Vision Systems on the market, the Azimut system is the most advanced and the best performing one. It consists of a very compact solution of 180 º angular-vision cameras that are connected to an intelligent 8″ monitor in which a 360º view of the exterior of the vehicle is composed and processed. The monitor itself integrates the image processor and all the control electronics, so it is not necessary to install more hardware onboard. For more information on how it works visit the site Azimut Vision 360.

The system is suitable for even long-length vehicles. For example, to install the system on a 15-metre-long bus, it is necessary to install a total of 6 cameras all around the vehicle: a front camera, a rear camera, and two cameras on each side. Other systems on the market can only handle a single camera on each side, resulting in complicated and sometimes impossible 360º image rendering in longer vehicles that only have 4 cameras. In this sense, the Azimut system is unquestionably the only one of the market applicable to practically all types of vehicles (buses, trucks, tractors, trailers, mobile homes, etc.), including long and articulated vehicles of great length.

Once the cameras are installed and configured on the bus, the next step is to calibrate the system using the calibration kit that comes with the equipment. The calibration kit consists of some blankets that are easily placed on the ground around the vehicle to be able to calibrate and overlap the images of all the cameras to be able to make a perfect 360º view. The layout of the blankets is very fast, thanks to the explanations of the equipment’s installation and configuration manual. In addition, once the calibration blankets have been arranged, the system software includes a self-calibration function, so that it is automatically calibrated. With the auto-calibration function, at least 4 of the 6 cameras are automatically calibrated, so it is only necessary to manually calibrate at most two cameras. In this way, it is possible to calibrate the system in less than half the time of other 360º systems on the market. This is an important advantage of this system compared to others offered by the competition.

Once the camera system is calibrated, the customer enjoys a sharp HD image full screen 360º view of the vehicle’s surrounding on the 8″ monitor. Other competing systems do not include a monitor, or are less than 8″. In addition, they do not offer the 360º image in full screen, since the screen is split to show the rear camera simultaneously. This way, with the Azimut system the 360º image is greater, and therefore easier to visualize for the driver. The system maximizes the display of the 360º image over the entire screen, and only shows the rear part when reversing is activated. In the same way, the display only shows the side when each one of the blinking lights is activated. Note that this functionality is not the most competitive teams either. 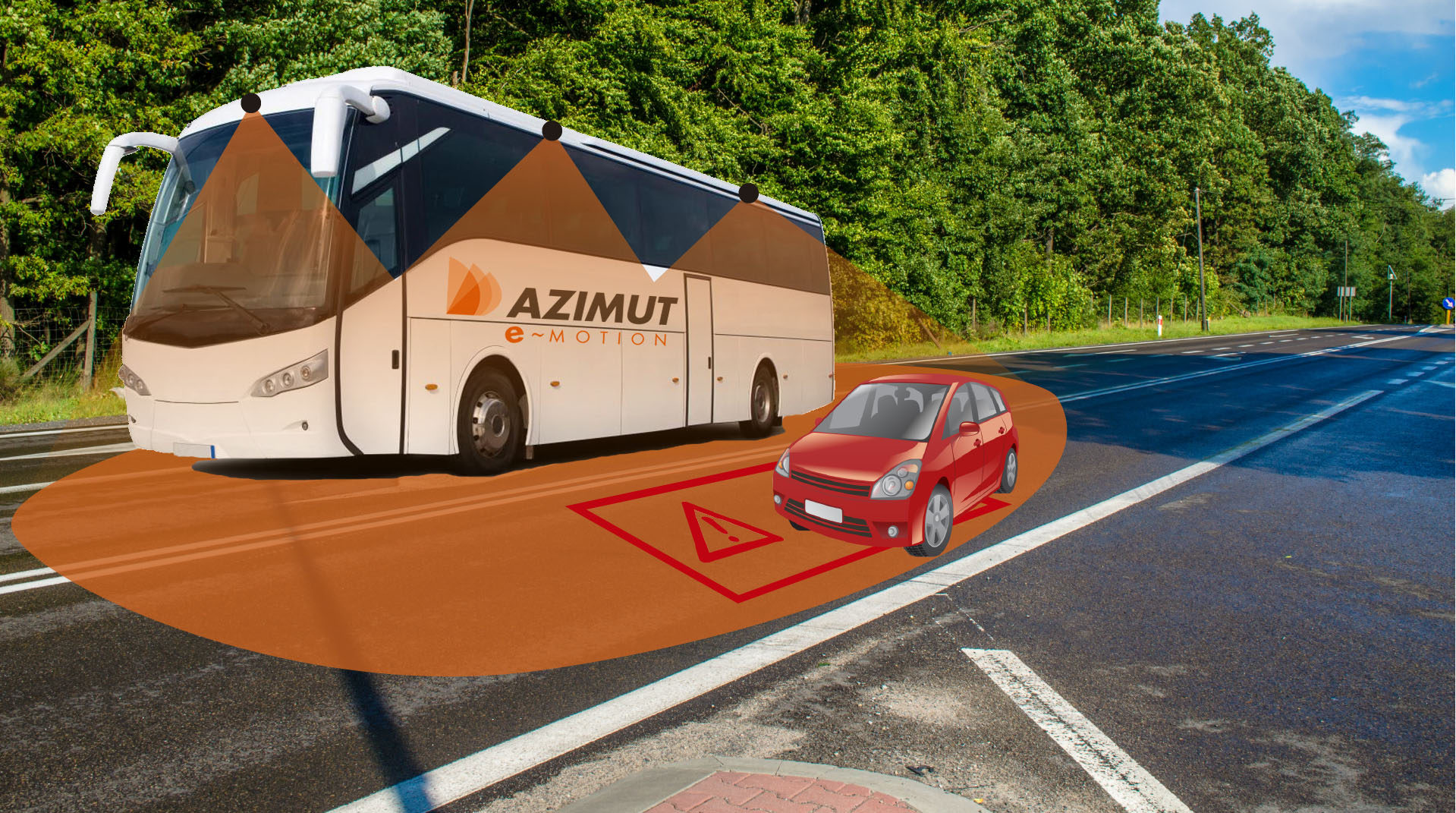 By putting the vehicle in motion, the most impressive thing is the complete, real-time feeling of the moving image. In other competing products, when the vehicle is in motion, the image is observed with jumps and with a noticeable delay. On the other hand, with this system, the image change is perfectly continuous and in real time. This way, what you see on the monitor is exactly what is happening at that precise moment on the outside of the vehicle. Safety in driving is therefore guaranteed. It is completely feasible to be able to circularly look only at the monitor when driving, especially when maneuvering at low speed, for example, when parking. In fact, it is possible to park the vehicle by looking only at the monitor, and there is no need to look at the rearview mirrors. Impressive!

The 360 º Azimut perimeter Vision Camera system also integrates the functionality of blind spot detection. At the same time that the driver enjoys a peripheral 360º view around the vehicle, the system itself is in charge of the detection of obstacles in the zones of blind spots, and warns the driver acoustically and visually, if an moving obstacle is detected around the vehicle. In this way, the system is the ideal tool to increase safety while driving and reduce the risk of traffic accidents. The system is capable of handling a larger number of cameras, cascading several systems. This way it is extrapolated to practically all types of vehicles, regardless of their length.

This advanced solution increases driving safety and reduces the risk of accidents. The driver and passengers will feel safer on board the vehicle. The advantages of this system are not only based on reducing possible collisions around the vehicle, but thanks to the total vision offered, the driver can maneuver at lower speeds more easily and thus avoid possible damage by having a faithful reference to Real time of the objects to dodge.